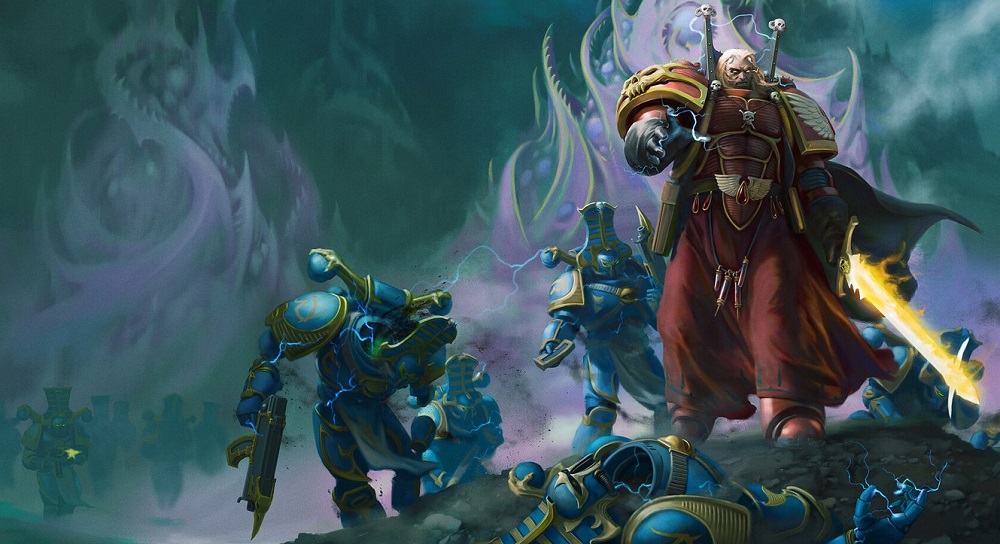 Warhammer 40K is a universe that’s unlike any other fictional universe. Thanks to over 20-years worth of rulebooks, codexes, and novels that have been published, the universe has rich and storied lore. This is lore that the average person can explore by checking out the novels from the Black Library’s catalog.

If you’re new to this universe or haven’t visited it in a while, then you’re probably going to want to check out our reviews as well as our guide to come up to speed. So, let’s take a journey to this universe—a universe that’s a combination of fantasy, science fiction and horror all rolled into one. And let’s begin our journey by taking a look at the best Warhammer 40K books.

Best Overall: Horus Rising: The Seeds Of Heresy Are Sown

It doesn’t matter how much time has elapsed, Book One of the Horus Heresy is still one of the best Warhammer 40K books. In this novel, the Imperium Of Man has stretched out across the galaxy thanks to the leadership of the Immortal Emperor. Promoting his son, Horus, to Warmaster, the Emperor retires from the battlefield while his forces are on the eve of ultimate victory. Unfortunately for Horus, the seeds of rebellion and heresy have already been sown amongst his brothers, thereby setting off the events of the 40K universe as readers understand it. This is the first book in the series, and as such, it sets the entire Warhammer 40K mythos in motion.

One of the books that remain at the top of many Warhammer 40K fan’s wish-lists is Eisenhorn Omnibus. This edition features the novels Xenos, Hereticus, and Malleus, and also includes the short stories Backcloth For A Crown Additional and Missing In Action. In this omnibus, Inquisitor Eisenhorn works to investigate the infernal workings of chaos, when he gets drawn into a conspiracy capable of rocking the reader to the core. He walks in the shadow of darkness to root out heresy in his galaxy, and when he discovers it infects the core of the Imperium itself, then he has to root it out himself.

In this book, which is book 4 of the Horus Heresy Series, the Warmaster Horus continues his Great Crusade, while the Primarch of the Emperor’s Children, Fulgrim, leads his warriors into battle. And he does it while remaining unaware that dark forces have already locked their gaze upon the Imperium of Man. As loyalties are tested and friendships are strained, every murderous and bloodthirsty desire will play out as the Emperor’s Children begin their descent into true corruption and onto the road that will lead them to the killing fields known as Isstvan V. A descent that will drag the reader along with them.

This book is written by Dan Abnett and is the seventh book in The Horus Heresy series. Mr. Abnett has written over 40 novels, including the Eisenhorn and Ravenor trilogies, and is an award-winning comic book writer. So it shouldn’t be any surprise that his contribution to the Black Library is pretty good. It follows the Space Marines of the Alpha Legion as they arrive on a heretical world in support of the Imperial Army. It’s a pacification campaign against strange forces, but the real question of this novel is whether or not the legion can be trusted when the Heresy breaks out.

The Best Legion Backstory: A Thousand Sons: All Is Dust

This is the 12th book in the New York Times Bestselling series The Horus Heresy and was penned by Graham McNeill. McNeill is an author who has written more than 20 different novels for the Black Library. In this story, the Great Crusade is at its pinnacle, and the Thousand Sons are some of the most loyal and most dedicated soldiers in that cause. Unfortunately, the Legion of Magnus The Red is looked upon with some suspicion due to their use of arcane techniques, and Magus is called to the planet Nikaea to answer charges of sorcery and that’s when the story takes off.

Best Sequel To The Original: False Gods: The Seeds Of Heresy Are Sown

This book was written by Graham McNeill, an author who has written 20 different novels for this series, novels that include A Thousand Sons, and in this book, he shows why he has written so many of the Warhammer 40K books. In this story, the XIVth Legion continues their Great Crusade and Horus has become more withdrawn as he struggles to deal with the jealousy of his brother primarchs. So when Noble captain Garviel Loken has misgivings about some of the ways as his brethren, and it’s clear that Horus has a personal stake in the reconquering of the moon of Davin. And all of this happens as dark forces rise up.

Galaxy In Flames is the third book in the Horus Heresy series and was written by Ben Counter. Mr. Counter is the author of several books in the Warhammer 40K library, including books such as The Grey Knights Omnibus, Battle For The Abyss, and this one. In this book, Warmaster Horus has recovered from the injuries he suffered on Davin and is now leading the Imperial forces against the rebel world os Isstvan III. An alliance between the Sons of Horus, the World Eaters, the Emperor’s Children, and the Death Guard seem capable of overwhelming the world’s defenses but an act of betrayal might change things more than anyone thinks.

This is the sixth book in the Horus Heresy series, but it seems to take a little break from the main storyline for a bit and wanders into some very distinct fantasy elements. The knightly orders of the planet of Caliban have protected the common people against the beasts that lurk in the darkened tracts of forest. Zahariel and Nemiel aspire to join the order, under the leadership of Lion El’Jonson, but the impending arrival of the Imperium causes new concerns to arrive, and the sons of Caliban must decide for themselves if they’re going to join the Lion in the Great Crusade.

This book is the eighteenth book in the Horus Heresy series and was written by Gav Thorpe. This author has written several books in this series, including Angels of Caliban, The First Wall, The Sundering, Deliverance Lost, and the Corax. This book follows evens as the Imperium is divided by the Horus Heresy and Corax and members of the Raven Guard have escaped the events on Isstvan V. After Corax returns to Terra, he gains access to ancient secrets and works to rebuild the depleted numbers of the Raven Guard. Unfortunately, elements are seeking to destroy the Raven Guard from within before they can replenish the Guard and threaten Horus’s well-laid plans.

A Guide To Warhammer 40K Books

For people who haven’t already begun reading the Warhammer 40K books, or who aren’t familiar with the universe, then deciding on a place to jump in can be somewhat daunting. This is because the universe isn’t a seamless series, but is several different book series that are coupled with anthology collections, lore, and codexes. That’s why we’ve decided to give our readers a little bit of a roadmap with this guide. Although this guide might not be as comprehensive as some people think it should be, we think it has more than enough information to get readers into the Warhammer 40K series of books. Okay? Well, let’s begin our odyssey.

The History Of Warhammer 40K

Warhammer 40,000 started as a miniature wargame that was created and produced by Games Workshop. The first edition of its ruleset was published in the fall of 1987 and it quickly became one of the most popular miniature war games in the world, with it being the most popular in the U.K. The setting of this game is a stagnant human civilization that is beset on all sides by malevolent supernature monsters and aggressive aliens.

This setting takes place some 39,000 years in the future—at about the turn of the 42nd millennium. It’s a universe that relies heavily on science fiction elements, but it also has fantasy and horror elements. As such, this universe has taken inspiration from J.R.R Tolkien, H.P Lovecraft, Paradise Lost, Dungeons & Dragons, 2000 AD, and Dune.

An Incomplete Look Into The Books Of Warhammer 40K

It’s almost impossible for us to provide our readers with a complete list of the Warhammer 40K books. That’s because the novels in this series are just too numerous. What we can do, however, is to give our readers a path into the Warhammer universe by covering some of the series contained within the overall library.

In our opinion, the best way into the Warhammer universe is by starting with the Horus Heresy series. Although the books in this series are actually from the Warhammer 30K collection of novels (because they take 10 years before the 40K books), they can provide the reader with the setting and background information they need to fully understand the universe. We suggest starting with the four books in this series and those books are:

Of course, not everyone is going to want to get into this universe by going through the Horus Heresy series, and instead, want to get to the central crux of the situation in Warhammer 40K, so in that case, we recommend our readers to go through the Eisenhorn series. In this series, the readers follow Inquisitors Gregor Eisenhorn and Gideon Ravenor as they and their retainers hunt down demons and heretics. Some of the books in this series include:

Of course, some people would say that a person could enter the Warhammer 40K book series anyway they want and we won’t argue with that assertion. You can indeed enter the universe through any of the books because many of them work well as standalone books. Let’s take a look at some of the other books that are in this collection.