Although sadly Kurt Vonnegut is no longer with us, he has left us a treasure trove of novels, plays, works of non-fiction and short stories. It’s such a formidable collection that it can be difficult for readers who are just now discovering him to find his best novels. Although in our humble opinion, it’s almost impossible to decide which of his novels are the best, and not even the experts can agree on which books are the most important, we thought that we’d give it a try anywhere, so all of our readers can find the best Kurt Vonnegut books.

Kurt Vonnegut had a way of writing stories that makes them feel topical, no matter when the reader reads them. This collection of short stories is a good example of that gift. In this book are twenty-five stories that are capable of making the reader laugh, perhaps offend them, and above all else, make them think. There’s probably no other collection of short works with such a creative vision that can stir a cacophony of human emotions the way that these stories can. These are stories that were originally published in publications such as The Atlantic Monthly, or the Magazine of Fantasy & Science Fiction, and now they’ve found their way into this wonderful collection.

This is probably the best introduction to the works of Kurt Vonnegut that anybody could have. It includes such great stories as Adam, Where I Live, The Manned Missiles, Miss Temptation, Harrison Bergeron, The Hyannis Port Story, Who Am I This Time, Unready to Wear, Long Walk to Forever, Deer in the Works, The Kid Nobody Could Handle, New Dictionary, The Lie, Epicac, The Foster Portfolio, Tomorrow and Tomorrow and Tomorrow, All the King’s Horses, The Euphio Question, Tom Edison’s Shaggy Dog, Go Back to Your Precious Wife and Son, Next Door, Report on the Barnhouse Effect, D.P., and More Stately Mansions. It also features the story that the volume is named after, Welcome To The Monkey House.

One of the most important novels that Kurt Vonnegut ever wrote has to be Mother Night. Although most experts put Slaughterhouse-Five or Cat’s Cradle as some of his most important works, we think that this one exceeds both of those books. Now, don’t get us wrong, we love those books, too. A fact easily ascertained by their inclusion on this top list. All we’re saying is that if any reader only has one book of Mr. Vonneguts that they can read, then this is the book. In fact, it’s such an important book to us, if there’s one book that we could have on a desert island, then this most certainly would be the book that we would want with us.

This is the story of a Nazi propaganda radio personality who is on trial for war crimes in Israel. Although we don’t want to give away the plot of this brilliant book, we would like to say that it takes black and white morality and blends it into shades of grey that’s not only brilliant but also chilling as well. It’s a book that’s as topical now as it was when it was first published in 1961. In our opinion, it’s a book that should be required reading on any college reading list, especially in these divided times. It illustrates just how easy it is for ordinary people to take the party to horrible acts, and gives the reader a glimpse into both the mindset of fanatics and survivors alike.

Cat’s Cradle is Kurt Vonnegut at his best. It’s whimsical while remaining satirical, and it’s a comment on the mind of modern mankind. This book shows to the reader how mankind can be mankind’s biggest enemy and its most existential threat. It’s narrated by John, who once set out to write a book titled The Day The World Ended about the day when the atomic bomb was dropped on Hiroshima. During his research, he writes to the son of Felix Hoenikker, Newt Hoenikker. And from there, the story moves forward. Although we don’t want to spoil the story, we would like to say that it’s a book that sure to leave its mark on the reader.

This book is only 287 pages, so many people are going to be able to breeze through it rather easily. However, don’t mistake its brevity for lack of depth, because this book is deep enough to draw the reader into the story and hold them transfixed. It’s a book that doesn’t try to inflate its pages nor its importance, it is what it is and doesn’t try to contort itself to the expectations of the reader. It’s a look at life and religion, and at the depths of the human heart itself. And it’s all wrapped up in ridiculousness that will affirm that this tale is just a story, although at its heart it does seem to hold the truth.

Although we feel that Slaughterhouse-Five should be recommended reading for any student before they graduate from high school, we can’t say that we think that this story will suit everyone. In our opinion, it’s one of the best antiwar novels ever written, a tale that’s both gripping and harrowing at the same time. It’s a book that’s filled with black humor, satire, and wit, but it also contains a writing style that others have complained to be sophomoric at times. Although we can’t agree with those assessments of this novel, it just goes to show that not everyone will enjoy the tale that Mr. Vonnegut lays out in this exciting book that’s rife with social commentary.

Because the protagonist of this book, Billy Pilgrim, has become unstuck from time, this book doesn’t follow any sort of linear or chronological narrative. It’s a book that jumps back and forth in location and time, but once the reader gets into the story it all makes sense. Of course, as we continue with this review, we’re not going to spoil the story, so we urge all of our readers to give it a shot. Sure, ever since this book was first published, it’s been a bit controversial and has even been labeled as obscene by some people, but we don’t feel that this book deserves that reputation. We feel it’s an important book in American literature and one that should be given its due.

A Guide To Kurt Vonnegut Books

As we said in our introduction, not everyone is going to agree with our assessment of the best Kurt Vonnegut books. Some people will undoubtedly believe that Slaughterhouse-Five should’ve been at the number one position on our list, or they’ll cite our exclusion of Breakfast Of Champions or Jailbird as grievous oversights. To our critics, all we can do is to say that we believe in our list. However, we will also concede that we aren’t infallible, so we will also write a guide on Mr. Vonnegut’s books. Anyone who doesn’t agree with our list can use this guide to find the books of his that they do find exceptional. 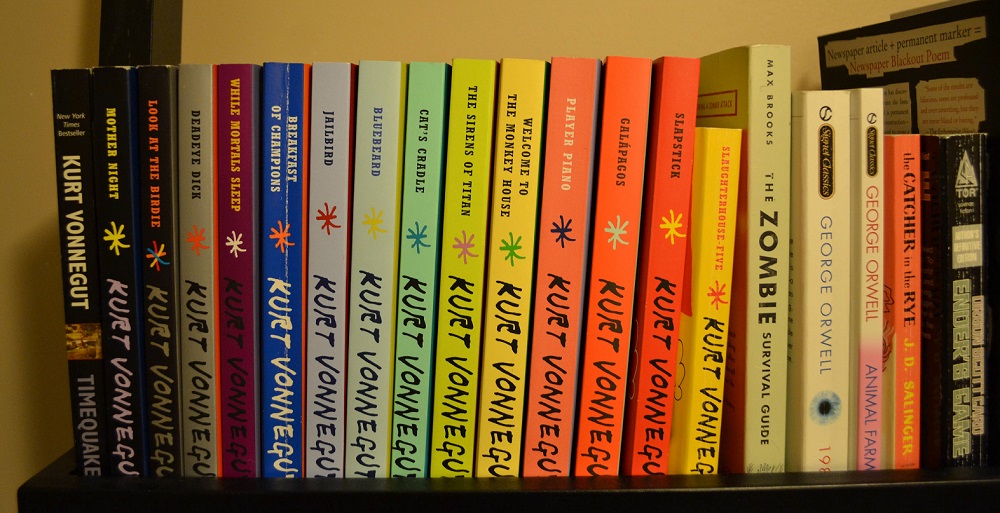 Kurt Vonnegut Jr. Was born on November 11, 1922, in Indianapolis, Indiana. He as a student at Cornell University, but decided to drop out in January of 1943 to enlist in the U.S. Army. While he was in the U.S Army, he studied mechanical engineering at Carnegie Institute of Technology and The University of Tennessee in preparation for his job in the military. He would eventually become deployed in Europe and was captured at the Battle Of The Bulge by German forces. The Germans would intern him at Dresden, a city that was heavily bombed by the Allies. This was a controversial bombing because it wasn’t clear whether the town had significant strategic importance. He managed to survive the heavy bombing by taking refuge in a meat locker at the slaughterhouse that he was forced to work.

When the war ended, Mr. Vonnegut married Jane Marie Cox and the two of them had three children together. After his sister died of cancer and her husband died in a train accident, Kurt Vonnegut would also adopt his sister’s three sons. In 1952, he published his first novel, Player Piano. Although this book wasn’t a commercial success, it did receive some positive reviews at the time. Over the next two decades, he would go on to several novels, but only a few of them received any measure of success, and those books were Cat’s Cradle in 1963 and Mr. Rosewater in 1964. However, when he published his sixth novel, Slaughterhouse-Five, that changed. This book became successful because the Vietnam War was going on at the time, and this book had a solid anti-war sentiment that seemed to resonate with its readers. It also received several good reviews as well. This would buoy this book up to the New York Times Best Seller List. Thanks to this book, Mr. Vonnegut became a household name, and he would go on to receive several honors and awards.

When Mr. Vonnegut’s wife converted to Christianity, a rift developed between him and her as her belief conflicted with his atheistic ideals. Eventually, Kurt Vonnegut left his home with her in Cape Cod and ended up moving to New York in 1971. eventually, the divorces, although they did remain friends until her death in 1986. Mr. Vonnegut would go on to marry Jill Krementz in 1979, a photographer he met when she was doing a series about writers. It was during this time that he saw a resurgence in his popularity with the release of several books that include Jailbird, Deadeye Dick, Bluebeard, and Hocus Pocus. Kurt Vonnegut would end up dying on April 11, 2007, in Manhattan.

Now let’s talk about the books that Kurt Vonnegut published. At the time of his death, Kurt Vonnegut had 14 novels, five non-fiction books, five plays, and three short story collections. So let’s take a look at these books and other writings. That’s the only way that our readers are going to be able to identify the books of his that they might want to read.