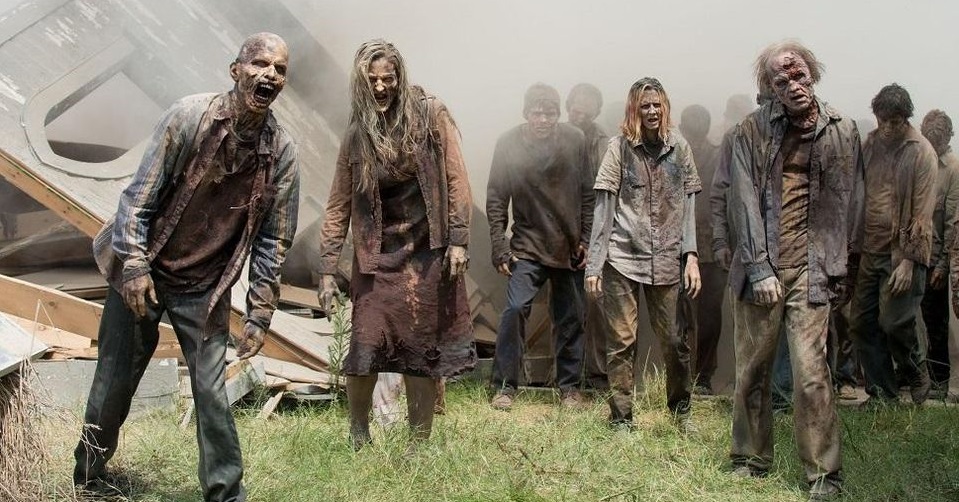 Every fan of horror knows that eventually there’s going to be a zombie apocalypse. Regardless of whether corpses rise from their tombs or some flu-like plague turns ordinary people into flesh gobbling ghouls, there’s going to come a day when society crumbles and the world of the living succumbs to the whims of the dead. Of course, for those who want to be prepared for it either practically or psychologically, the following books offer a glimpse into this fictitious fate of mankind. Below are the best zombie books in this horror genre—books that are sure to have the readers sleeping with one eye open or stocking up on canned goods for the inevitable zombie apocalypse.

This zombie book is a little bit different than what most people are going to expect. Sure, it’s a book that’s designed to entertain, which it does in some parts better than others, but it’s also designed to inform. In this guide, consumers will find some truly practical advice that’s not only applicable against the next zombie uprising but is also valuable information for any emergency. Some of the chapters of this book include the myths and realities of zombies, weapon and combat techniques, securing homes against advancing zombies, and equipment needed for a zombie apocalypse. And that’s only the beginning of the information found in this book.

This book was originally published in 2003 by the son of Mel Brooks, Max Brooks. It’s been popular ever since then, it’s rise running parallel with societies’ interest in the living dead. It’s a book that makes a great gift for zombie lovers and one that any hardcore zombie fan is going to want to have in their library. Although there are some sections of this book that read more like a government published survival guide than a zombie book, there’s still plenty of humor and fun in this book to keep just about anyone interested to the very end.

Even though some people might be tempted to avoid this book because the saw the movie and weren’t all that impressed with it, we want to encourage those people to pick up this book. That’s because it’s a work of art on its own and the movie had little or nothing to do with its story. This is a book written by the first-hand survivors of the upcoming zombie apocalypse and it gives the reader a narrative that’s not only entertaining but also charged with emotion. Many people encapsulate the essence of this book by referring to it as somewhat of an emotional rollercoaster that takes the reader up to the brink.

This book examines the emotional upheaval that’s caused by a fictional zombie apocalypse, a journey that started in China and moves all over the globe. Instead of focusing on shambling corpses, this book decides to instead focus on the human toll caused by the even and the political and social fallout that comes from it. In our opinion, although we felt it was a little longer than it should’ve been, it still told a story that had a great emotional punch to it. Anyone who hasn’t read this book and considers themselves to be a fan of zombie horror is going to want to rectify that situation as soon as possible.

Best Scary Book: The Girl With All The Gifts

Mike Carey is an acclaimed writer that’s known not only for his adaptation of Neil Gaiman’s Neverwhere but is also known for writing the screenplay, Frost Flowers. He’s also widely known for writing Lucifer and Hellblazer, the last of which was filmed as Constantine. In our opinion, this book is where this writer achieves something marvelous. This book is a twist on the traditional zombie fare and will leave the reader’s expectations laid as bare as if it were ripped out of their body by a pair of gnarling teeth.

Although this book does start a little bit slow, it begins to build up a head of steam as it moves along. The one thing that’s worth mentioning about this book is that it really is one of the more original zombie stories told and it’s told with such enthusiasm that the reader simply can’t help but become swept up in it. All of this makes this a book for not only fans of the zombie genre, but for anyone who enjoys a good story. And believe us when we say, it truly is a good story.

Warm Bodies is another novel that many people might be more familiar with its film adaptation than the book itself. And that’s not necessarily that bad because the film was a bit quirky and was also unique. However, we feel that this book does an even better take on the zombie genre than the film, and we feel that many people are going to get a hoot out of reading it. Sure, it’s not as dark, serious and gory as some people are going to like, but it is a wonderfully told story that combines elements of this horror genre with the teen romance genre. And it does a pretty good job of mixing the two genres.

The book starts with the main character being a zombie who discovers he’s a little bit different than most other zombies. Sure, he does engage in the occasional bit of cannibalism, but he’s also riding around escalators, and listening to music in his impromptu home–a 747 plane. The story then takes a subtle shift as he meets a girl, a survivor of the zombie apocalypse, who he can’t get out of his undead mind. His one desire is to protect her and as the story develops, their relationship would transform in a most unlikely way. It’s good entertainment all around.

Now we’re sure we’re going to get some flack for putting Stephen King, the master of horror and suspense, so far down on our list of zombie books, but we had to. Not because we didn’t like his story, because we did enjoy it very much. In our opinion, it starts as one of the fastest developing zombie stories we’ve ever read. It hits the reader directly between the eyes and then never takes its foot off off the gas pedal. And it continues through the book just about till the end, that’s when it takes a twist that we can’t say that we’re happy with it taking.

Just to clarify things, this book is by no means a terrible zombie book. And as anyone would expect from a writer the caliber of Stephen King, it’s written extremely well. Unfortunately, like a few of Mr.King’s novels, it ends up disappointing at the end. Now that’s not to say that we don’t recommend reading this book because we do. That’s why it’s on this top list of the best zombie books of all time. We just think that readers should temper their expectations, so they’re not too disappointed. If they do that, then they may end up reading a book that they enjoy.

This book was originally compiled in 2008 and it’s not so much a zombie book as a collection of zombie stories under one cover. Although this revelation may make some zombie genre fans skip over this book, they might not want to be so quick to do so. That’s because this book contains zombie stories collected by some of the most remarkable authors in the horror genre. Some of the writers of these stories include Stephen King, Neil Gaiman, Clive Barker, Joe R. Lansdale, George R.R. Martin, Harlan Ellison. Joe Hill and many, many more.

As one would expect from such a diverse collection of short stories from some of the most prolific writers in the horror genre, each of these stories is unique and ready to stand on its own. If there was one complaint that we could address about this collection of short stories, it’s the fact that the Kindle version appears to have fewer stories than the softcover version. Otherwise, this is a great collection of horror stories sure to enthrall any zombie fan. It contains some great stories that include Home Delivery; Sex, Death And Starshine, and Everything Is Better With Zombies.

Best Apocalyptic Imagery: The Reapers Are The Angels

Anyone who thinks zombie books are all about action, explosions, and gore is probably going to need to reevaluate their assessment of the genre after they read this book. That’s because this is a haunting, dark and beautiful story that keeps the reader glued to the page and has them wondering why it ended so soon. It’s a quick read that’s punctuated with imagery that the reader won’t find in any other story. This book is told by a 15-year old girl known as Temple who recounts the fall of human civilization and lays bare the completely savage nature of mankind.

After reading this book, we were honestly confused as to why this book has gotten the attention it deserves. The only fault that we could find with it is that we wanted the story to go on for another hundred pages or so. Having said that, we’re sure that it might not be everyone’s cup of tea, however. This is especially true if the reader is searching for a more action-oriented zombie book. For everyone else, however, it’s a great story that the reader is not going to want to put down.

If we are to speak honestly here, we have to say that this book wasn’t even on our radar until we held a physical copy of it in our hands. We generally like to think of ourselves as horror and zombie aficionados, so we found it very curious that this book wouldn’t even end up on our radar. In fact, we even thought that it was a bit suspicious that we hadn’t heard of it. We erringly thought that perhaps we hadn’t heard about it was because it wasn’t a good book, but we couldn’t have been more wrong. This book was a fantastic read, especially for fans of the zombie genre.

This book begins just one month after a zombie apocalypse when zombies had begun to rise up against the remaining pockets of survival. It’s from this simple beginning that the story fans out and enlarges in its scope. We won’t spoil the book any further, but we will say that all things considered, we thought that it was a wonderful story and one that’s worth reading. Sure, there were moments when the story felt a bit rushed, but overall, it did a good job of telling its story. Anyone tired of the kinder, friendlier zombies of the modern age, will want to take a look at this much darker book.