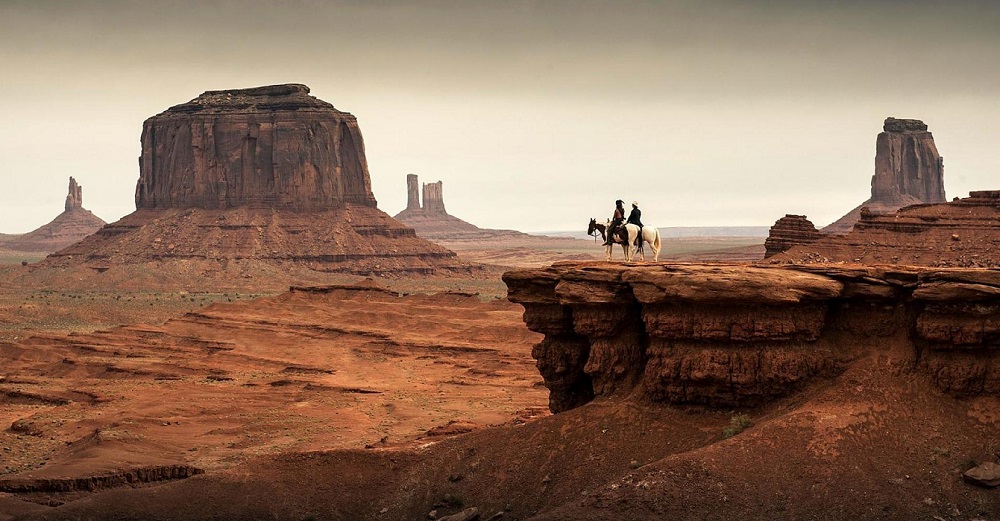 The western is a fiction genre that’s primarily set after the Civil War, towards the end of the 19th century, although there are a few stories that occur before the war. These stories contain ranchers and Pinkertons, cowboys and Native Americans, and gunslingers, outlaws, and bounty hunters in various amounts. This is a genre that usually portrays the end of what is considered the “idealized American frontier” or man against nature.

The stories that fall under this genre often have a mythic nature to them—although many of the revisionist westerns do try to peel away that veneer. Either way, it’s a landscape that can host several interesting stories—stories that can include everything from ranchers standing up to bigger landowners to cowboys exacting their revenge. That’s why we’ve decided to review some of the best western books currently available and introduce them to all of our readers.

Editor’s Choice: No Country for Old Men By Cormac McCarthy

Although we do have to admit that some readers might have issues with Cormac McCarthy’s style of prose, we feel that this novel is one of the best western books ever written. This is a book that’s set on the Texas/Mexico border and tells the story of a hunter named Llewellyn Moss, who comes across a pickup trunk that’s surrounded by dead men. In the truck, he finds a load of heroin, as well as two million dollars in cash—cash that he decided to take for himself. Unfortunately, by taking the money, he sets off a chain reaction of events that can’t even be contained by law enforcement. This is a story with themes as old as civilization itself and a plot that could’ve easily been pulled from the bloody headlines of today’s news.

For anyone unfamiliar with the author, let us offer up a brief explanation. He was born in 1933 and is not only an American novelist but also a short-story writer, a playwright, and a screenwriter. He has penned 8 novels throughout his lifetime—novels that cover not only the western genre but also the southern gothic and post-apocalyptic genres. His first success came when he wrote All The Pretty Horses in 1992, a book for which he was awarded a National Book Award. In 2005, he wrote this novel—which was made into a 2007 film that won four Academy Awards, and he followed that up by writing The Road in 2006—a book that won him a Pulitzer Prize.

Judging by his track record, it’s easy to see why No Country For Old Men is considered a masterpiece by many fans. Although his sparse use of punctuation and lack of character attribution makes the text somewhat hard for people unfamiliar with his style to read, once a person adapts to it, the sparse style adds additional depth to the novel and makes the story feel even more harrowing.

Anyone interested in the western movie genre might have watched the movie Jeremiah Johnson—a movie that was released in 1972 and starred Robert Redford. It tells the story of a mountain man who was targeted by the Crow Tribe and had to fight a decade long one-man war against them to extract retribution from them for the killing of his wife. And that movie is based upon the story that can be found in this book: Crow Killer.

Although we feel that Robert Redford did admirably in his role as Jeremiah Johnson, the book tells the story of the real Jeremiah Johnson—at least, the real story as accounted by the man himself. Mr. Johnson was a man that stood 6’2” tall and weighed approximately 250-pounds. And as some critics have pointed out, the book makes him out to be the Punisher of his day.

The story begins in 1847 when Johnson arrives back at his trapper’s cabin and finds that his Native American wife and their unborn child had been murdered. This sets him off on a path of vengeance against the Crow tribe. It’s a story set in a fierce and almost apocalyptic frontier and is a compilation of the stories that the man not only told others about himself but also the stories that other people have told about them.

How accurate are the events in this story? We can’t say for sure, but considering the mythic nature of this western, it’s probably to say that there was at least some confabulation concerning the events as they unfolded. Regardless, it’s still a great story that many readers are going to want to read from cover to cover in one reading. It’s a compelling story that at the very least gives the reader a glimpse into the life of a frontier mountain man, and at the most, tells one of the best western revenge stories ever told. In our opinion, it’s worth a read.

Also Consider: Down the Long Hills By Louis L’Amour

For anyone looking for a western classic, then this one by Louis L’Amour might be just what the doctor ordered. This book was originally published in 1984 and is widely considered to be one of the best westerns by one of the most respected storytellers in the entire western genre. This story begins with a wagon train cutting west through the frontier towards Fort Bridger, Wyoming. Onboard one of the wagons is 7-year old Hardy Collins who is heading to meet up with his father. During the night, his horse wanders off and he heads out to retrieve the horse because it’s his responsibility. As he wanders out, he’s followed by 3-year old Betty Sue Powell.

After Hardy finds his horse, he and Betty Sue return to the stationed wagon train and find everyone has been massacred by Native American Indians in a raid. Although he’s traumatized by the event, he knows enough from the lessons of his father that he has to head towards Fort Bridger if he has any hope of saving himself and this little girl. Armed with only his knife and riding his horse, he heads out on a perilous journey that will test every one of the lessons that his father taught him over his short lifespan. On this journey, he’s not only going to have to deal with Indian raids but will also have to deal with weather, wolves, and even bears. And along the way, he’s going to have to forage for food and water to keep them alive.

Although some people may consider the story of a 7-year old and a 3-year surviving on the frontier on a perilous journey fraught with so many obstacles unbelievable, the pure skill of the author manages to pull this off seamlessly. As you read along with the story, you believe that these children are real and that Hardy’s father was able to give him some important lessons on survival that will help them on their way. It’s for that reason, we highly recommend this western.

What we liked about it
(none)

A Guide To The Western Book Genre

Although the western genre is one that isn’t as popular as it once had been, there are still dozens, if not hundreds, of books in this genre that are worth reading. This simple fact made it quite challenging for us to choose some of the best western books that are available for readers to read. That’s why we had to leave many of the greats behind.

Yes, we know that there’s going to be some controversy over the books that we left off of our list, so we’ve decided to write a guide on the western genre to appease those of you who may feel that we didn’t dig deep enough into this genre. While it’s impossible for us to cover every single western novel out there, we can at least give our readers a road map to the genre. With that being said, here is our guide to westerns—a guide we hope helps all of our readers discover the western classics that are right for them.

The Seven Basic Plots Of Westerns

In most genre-specific guides, we would go over some of the sub-categories that can be found within it. For example, the suspense genre would be comprised of techno-thrillers, supernatural thrillers, and crime thrillers. For the western genre, however, we’re going to take a different path. We’re going to cover the seven basic plots that are used for the stories in this genre, and we’re going to look at each one in as much detail as we can.

A plot that’s frequently used in western books and movies is the story of the marshal. These stories center on a lawman who has to overcome challenges to keep a town safe. This can be widespread lawlessness, protecting precious resources, or dealing with outlaws. These stories usually have the theme of good versus evil engrained at their core.

Another frequently used western plot is the revenge plot. These stories center around the protagonist seeking revenge for a wrong that may (or may not) have happened. Sometimes these stories are paired with mystery elements to make for a more suspenseful story.

The ranch story is another common plot device found in westerns. It focuses on a rancher, or ranchers, who have to defend their range against a larger landowner or cattle rustlers. A variation on this plot device is a town hiring a group to defend their town against outlaws. Something that can be seen in movies such as The Magnificent Seven—which was actually based on the movie Seven Samurai.

Most readers who are familiar with the western genre will no doubtfully be able to cite a million examples of this plot device. This plot involves the construction of a railroad or telegraph line and the struggles that surround the implementation of these technologies.

This plot involves Native Americans being displaced by the Cavalry who are attempting to tame the wilderness. Although these stories aren’t as popular as they once were because of the potential for misrepresentation of Native Americans and white pioneer’s attitudes towards them, there are still plenty of books in this sub-genre to choose from.

Additional Western Plots To Think About

Okay, now that we’ve gone over some of the more basic western book plots, we wanted to touch upon some of the plot and/or sub-genres that we might have missed along the way, so we thought that we’d include them here. That way, we’re not missing any of the major beats of this American book genre that readers have enjoyed for over 160+ years.

Any of the above western sub-genres are sure to bring excitement to the reader if they care to spend a few moments of their time and give them a chance.