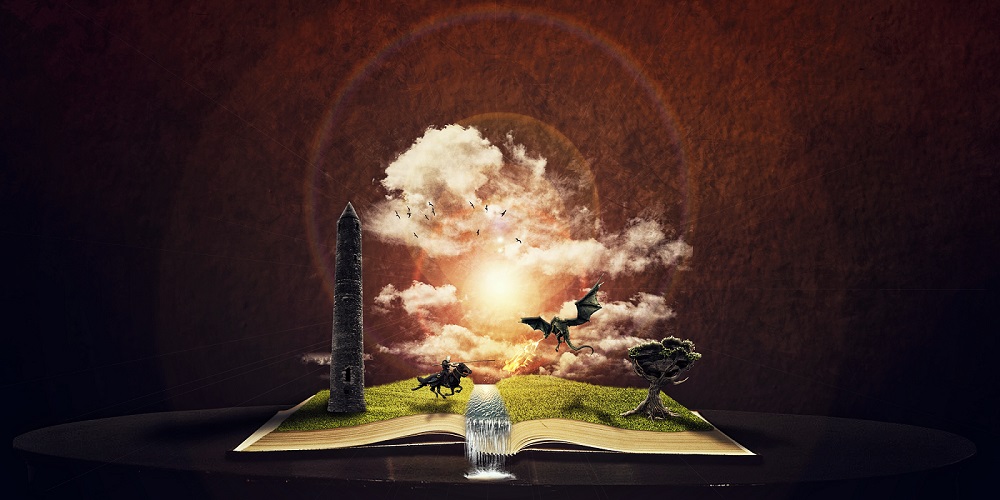 Set in detailed and fantastic worlds, high fantasy is a genre that captures the imagination and whisks readers to realms beyond their own. This genre usually features a protagonist who has to battle the forces conspiring against them and is usually centered by the theme of good versus evil. This makes it quite different from low fantasy or sword & sorcery fantasy.

These stories also usually have the main character fighting against overwhelming odds that they have to overcome to succeed. This feature, coupled with imaginative world-building, makes these books great page-turners that the reader won’t be able to put down. We should know because we’ve reviewed the best high fantasy books that we believe all fans of this genre are going to enjoy.

Editor’s Choice: The Lord of the Rings: 50th Anniversary Edition

Many people have watched and enjoyed the Lord of the Ring’s movies directed by Peter Jackson, and we have no intention of besmirching the good name of those movies. The Fellowship Of The Rings, The Two Towers, and The Return Of The King are high fantasy classics that are well-loved by fantasy lovers. However, what we will say here in this review is that despite the movies being incredible works of art and entertainment, the Lord Of The Rings books are even better. The books are the perfect example of high-fantasy world-building, and anyone who hasn’t read them is truly missing out.

The three books in the Lord Of The Ring’s series are considered by many to be the masterpiece of J.R.R Tolkien’s works. It’s a story that’s a classic example of good versus evil and is built in a world so well made, the reader feels like they’re actually in it. These books tell the story of the One Ring created by Sauron to rule all of the Rings Of Power crafted by Elven smiths, Sauron’s desire to use the One Ring to increase his dominion, and a young Hobbit named Frodo quest to destroy it in the Cracks Of Doom.

These books aren’t just a story of good versus evil or the quest of an unlikely hero. They also tell the story of camaraderie and friendship, of love lost and found, and of a better long-gone era. And although these stories were released in three separate books, they are bound together in this 50th Anniversary edition that contains all of them under one cover. This volume contains one of the best quests in all of fantasy, and will keep the reader hanging on to the very end. Any lover of high fantasy, or anyone who just loves a good story, is going to want to have this book on their bookshelf.

The Mistborn Trilogy are novels written by American author Brandon Sanderson and the first installment was published in 2006. This trilogy consists of three books: The Final Empire, The Well Of Ascension, and The Hero Of Ages. It’s a story that takes place in a world named Scadrial in a region that’s known as the Final Empire. This was, and still is, a book series that’s loved by high-fantasy fans. It’s so well-loved, in fact, that an adventure game was released in 2011 based upon its concepts.

In the Final Empire, readers are introduced to a world where the vegetation has turned brown, the sky and sun have become red, and volcanic rains of black ash is the norm. It’s also a world that’s covered in an unnatural fog at night. One thousand years before the official story begins, the Lord Ruler of the Final Empire, gains access to the Well Of Ascension—a divine power that’s rumored to have defeated the Deepness. The story then proceeds from that point as evil cloaks the land.

This is a book series that’s written simply, yet is capable of delivering not just excitement and wonder, but also adventure as well. It’s a feudal world that marries the concepts of a ruling class and a powerful religious movement with magical and sometimes steampunk influences tossed in for good measure. All couched in an alchemical blend of magic that’s unique, to say the least. And fortunately, the three books of this trilogy are all contained in one box set that allows the reader to enjoy it from beginning to end.

This is a story of an oppressed world, a fight against the Lord Ruler’s inquisitors, and the quest to master the primal forces of Feruchemy, Allomancy, and Hemalurgy. So anyone looking for an adventure might want to head to the Final Empire and embrace all that it has to offer to the imagination—both good and bad.

Far too often, maybe more often than any of us would like to forget, high fantasy books contain an all-male cast of characters, and don’t always tell compelling stories that both men and women can enjoy. Fortunately, this book by Kristin Cashore doesn’t fall into that genre trope. This book features a strong female protagonist, and it manages to not only have thrilling fantasy moments but also manages to work in a thrilling romance as well. It’s a book that doesn’t fall victim to some of the outdated fantasy tropes we’ve become accustomed to seeing and tells a story that has won an assortment of awards.

Some of the awards won by this book include the Mythopoeic Fantasy Award for Children’s Literature, ALA Best Book for Young Adults, Amazon’s Best Books of 2008, 2008 Booklist Editors’ Choice, Publishers Weekly Best Book of the Year, the 2009 Amelia Bloomer List, and the 2009 Blue Ribbon List. It’s also a book that’s been called exhilarating and wistful by the New York Times Book Review, as well as a book with a powerful romance from the LA Times Book Review. It’s an incredible high fantasy book from an author known for writing great books and is followed up by its sequel Fire and its companion book: Bitterblue. Two books that also won numerous book awards and are well-loved by fans.

This book tells the story of Katsa, a strong yet vulnerable young woman who lives in the Seven Kingdoms; A kingdom where everyone has a special talent that’s referred to as the Grace. And Katsa’s Grace is the art of killing. A skill that is initially used by her uncle the king as a way to enforce his laws, until she meets Prince Po—and her life begins to change. She then begins to learn the secret of her special Grace, as well as a secret that could destroy the Seven Kingdoms.

A Guide To The Fantasy Genre

Fantasy book readers are bombarded by a variety of different terms including high fantasy, low fantasy, historical fantasy, heroic fantasy, sword-and-sorcery, and Medieval fantasy. These are all terms that describe a small segment of the overall fantasy genre, and to be honest, all of these terms can be somewhat confusing—even to someone who has read a lot of fantasy books.

What makes these different subcategories even more confusing is that many of these genres overlap—although they don’t have to overlap. There are Medieval fantasies that are also historical fantasies, heroic fantasies with elements of sword and sorcery fantasy thrown in, and so-on and so-forth. It can be difficult for the average reader to sort through all of the subgenres to find the one that suits them the best.

This guide is an attempt to rectify that problem and to give our readers a better understanding of each genre. How successful we’re going to be at this task is yet to be seen, but we do feel that we can shed a little bit of light on the fantasy genre so most readers are better equipped at finding the novels that they like the best. Sound good? Well, if it does, then please read on.

Since we just finished reviewing the best high-fantasy books, we thought that we’d start this guide to the fantasy genre with high-fantasy. This subgenre of fantasy is easily identified by the scale of its settings, and the feel of its themes, plot, and characters. In high-fantasy stories, there’s usually (but not always) a strong underlying theme of good versus evil, the importance of kinship, and other such high ideals.

Most of the stories in this genre deal with some type of evil lord that is hell-bent on taking over the world or empire and/or killing the main protagonist. Speaking of the main protagonist, he or she is usually a reluctant hero that’s outmatched by the superiority of the evil lord. Put simply, they’re outmatched or outgunned and must overcome huge odds to succeed.

Some of the books that can be found in the high-fantasy genre include:

The next genre we want to talk about is low fantasy. Low fantasy is usually characterized by magic or magical events existing in a world that can by all measures be considered ordinary. Unlike high-fantasy books where worlds are fictional and sometimes contain their own rules of physics, low fantasy books feature worlds most like our own.

The characters in these stories have more realistic flaws, needs, and wants than high-fantasy characters and they tend to be less idealistic and mythic as well. The term “low fantasy” means that the story has less of the traditional fantasy elements found in high fantasy. It can be thought of as ordinary heroes in an ordinary world with the occasional flash of fantasy for color.

Although low fantasy books deal with realistic settings and people, they don’t deal with actual historical events or individuals. No, that’s the space occupied by historical fantasy novels. These novels exist in a specific historic era that can range from Bronze Age to the Dark Ages and often incorporate real people and/or events into a story with some fantastical elements.

Heroic fantasy is a fantasy subgenre that’s characterized by a low-tech world that’s dominated by magic. It can contain a fantastic world like high fantasy or it can contain a realistic earth setting like low fantasy—it doesn’t matter. It’s a setting that’s filled with masculine depictions of men, feminine descriptions of women, and a story that is teeming with adventure.

As the name of this genre so firmly implies, the stories set in the sword and sorcery genre features sword-wielding heroes in violent clashes with plenty of magic thrown in. These stories also usually feature a strong male protagonist and a beautiful female romantic love interest.

While high-fantasy stories deal with world-changing events, sword and sorcery stories tend to focus on slightly smaller events. These stories usually focus on the protagonist engaging in personal battles that may include the hero killing the lord that enslaved his people or defeating an evil cult.

Medieval Fantasy is sort of a catch-all genre that has stories from the Middle Ages. This means that it’s usually a feudal social structure with elements of Medieval mythological elements that are sometimes taken from Northern and Western Europe and are occasionally taken from Eastern cultures. The Medieval genre is capable of encompassing other subgenres including all of the above subgenres we’ve talked about so far, so it’s not a helpful term for most people. Not unless they just want a good story based in the Middle Ages and don’t care if its high fantasy, low fantasy, sword and sorcery based, or just a good heroic epic.